A limited range of arithmetic expressions are provided. Addition and subtraction have the lowest precedence, but this can be changed with parentheses.

As per usual in old school BASIC, all program statements must be prefixed with a line number which indicates the order in which the statements may be executed. There is no renumber command to allow all line numbers to be modified. A statement may be modified or replaced by re-entering a statement with the same line number:

Note that all keywords and variable names are case insensitive (and will be converted to upper case internally by the lexical analyser). String literals will retain their case however. There is no inherent limit on the length of variable names or string literals, this will be dictated by the limitations of Python. The range of numeric values is also dependent upon the underlying Python implementation.

Note that variable names may only consist of alphanumeric characters and underscores. However, they must all begin with an alphabetic character. For example:

are all valid variable names, whereas:

Numeric variables have no suffix, whereas string variables are always suffixed by ‘$’. Note that ‘I’ and ‘I$’ are considered to be separate variables. Note that string literals must always be enclosed within double quotes (not single quotes). Using no quotes will result in a syntax error.

Array variables are defined using the DIM statement, which explicitly lists how many dimensions the array has, and the sizes of those dimensions:

Note that the index of each dimension always starts at zero. So in the above example, valid index values for array A will be 0, 1 or 2 for each dimension. Arrays may have a maximum of three dimensions.

As for simple variables, a string array has its name suffixed by a ‘$’ character, while a numeric array does not carry a suffix. An attempt to assign a string value to a numeric array or vice versa will generate an error.

Note that the same variable name cannot be used for both an array and a simple variable. For example, the variables I$ and I$(10) should not be used within the same program, the results may be unpredictable. Also, array variables with the same name but different dimensionality are treated as the same. For example, using a DIM statement to define I(5) and then a second DIM statement to define I(5, 5) will result in the second definition (the two dimensional array) overwriting the first definition (the one dimensional array).

Array values may be used within any expression, such as in a PRINT statement for string values, or in any numerical expression for number values. However, you must be specific about which array element you are referencing, using the correct number of in-range indexes. If that particular array value has not yet been assigned, then an error message will be printed.

As in all implementations of BASIC, there is no garbage collection (not surprising since all variables have global scope)!

Constants may be defined through the use of the DATA statement. They may consist of numeric or string values and are declared in a comma separated list:

These values can then later be assigned to variables using the READ statement. Note that the type of the value (string or numeric) must match the type of the variable, otherwise an error message will be triggered. Therefore, attention should be paid to the relative ordering of constants and variables. Further, there must be enough constants to fill all of the variables defined in the READ statement, or else an error will be given. This is to ensure that the program is not left in a state where a variable has not been assigned a value, but nevertheless an attempt to use that variable is made later on in the program.

The constants defined in the DATA statement may be consumed using several READ statements:

The supply of constants may be refreshed by defining more DATA statements:

It is a limitation of this BASIC dialect that it is not possible to assign constants directly to array variables within a READ statement, only simple variables.

The REM statement is used to indicate a comment, and occupies an entire statement. It has no effect on execution:

Note that comments will be automatically normalised to upper case.

The STOP statement may be used to cease program execution. The command END has the same effect.

A program will automatically cease execution when it reaches the final statement, so a STOP may not be necessary. However a STOP will be required if subroutines have been defined at the end of the program, otherwise execution will continue through to those subroutines without a corresponding subroutine call. This will cause an error when the RETURN statement is processed and the interpreter attempts to return control back to the caller.

Assignment may be made to numeric simple variables (which can contain either integers or floating point numbers) and string simple variables (string variables are distinguished by their dollar suffix). The interpreter will enforce this division between the two types:

The LET keyword is also optional:

Array variables may also have values assigned to them. The indexes can be derived from numeric expressions:

The PRINT statement is used to print to the screen:

Multiple items may be printed by providing a comma separated list. The items in the list will be printed immediately after one another, so spaces must be inserted if these are required:

A blank line may be printed by using the PRINT statement without arguments:

If the print command ends with a comma, a new-line will not be automatically added. 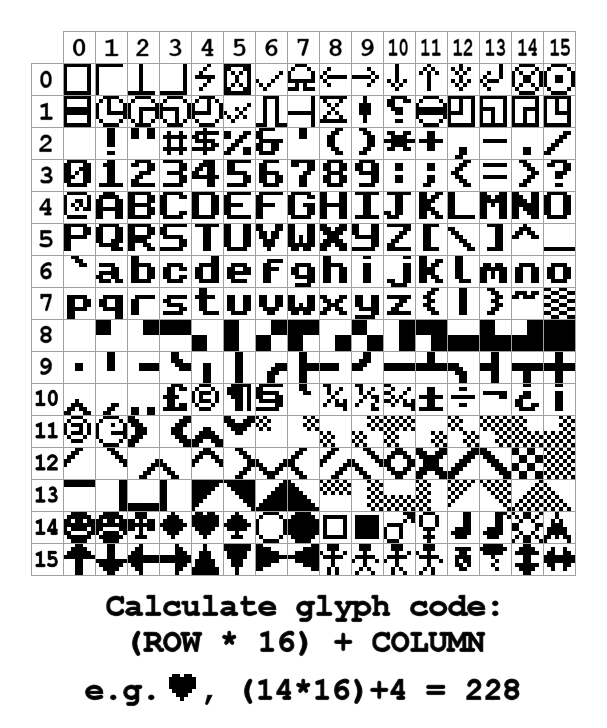 You can change the screen mode with the MODE x command. Where x is the mode you want to switch to. Changing mode will clear the screen. Different modes offer compromises between number of characters and colors on the screen.

These commands allow you to access and modify the current contents of the screen and control when the screen is drawn.

Like it or loath it, the GOTO statement is an integral part of BASIC, and is used to transfer control to the statement with the specified line number:

The GOSUB statement is used to generate a subroutine call. Control is passed back to the program at the next statement after the call by a RETURN statement at the end of the subroutine:

Note that without use of the STOP statement, execution will run past the last statement of the main program (line 30) and will re-execute the subroutine again (at line 100).

Subroutines may be nested, that is, a subroutine call may be made within another subroutine.

A subroutine may also be called using the ON-GOSUB statement (see Conditional branching below).

Loops may be nested within one another.

The STEP statement allows the loop variable to be incremented or decremented by a specified amount. For example, to count down from 5 in steps of -1:

Note that the start value, end value and step value need not be integers, but can be floating point numbers as well. If the loop variable was previously assigned in the program, its value will be replaced by the start value, it will not be evaluated.

Conditional branches are implemented using the IF-THEN-ELSE statement. The expression is evaluated and the appropriate jump made depending upon the result of the evaluation.

Note that the ELSE clause is optional and may be omitted. In this case, the THEN branch is taken if the expression evaluates to true, otherwise the following statement is executed.

You can optionally give the GOTO keyword before your line numbers. This is for compatibility with other BASIC dialects. e.g. 40 IF I > J THEN GOTO 50 ELSE GOTO 70

It is also possible to call a subroutine depending upon the result of a conditional expression using the ON-GOSUB statement. If the expression evaluates to true, then the subroutine is called, otherwise execution continues to the next statement without making the call:

The logical operators AND and OR are also provided to allow you to join two or more expressions. The NOT operator can also be given before an expression.

= and <> can also be considered logical operators. However, unlike AND or OR they can’t be used to join more than two expressions.

Expressions can be inside brackets to change the order of evaluation. Compare the output when line 30 is changed:

The built-in functions either set the value of a variable directly, or they return a value as if they were a variable.

As an alternative to branching, Ternary functions are provided.

The INPUT statement is used to solicit input from the user:

The default input prompt of ‘? ‘ may be changed by inserting a prompt string, which must be terminated by a colon, thus:

A mismatch between the input value and input variable type will trigger an error.

It is a limitation of this BASIC dialect that it is not possible to assign constants directly to array variables within an INPUT statement, only simple variables.

Selected numeric functions are provided, and may be used with any numeric expression. For example, the square root function, SQR, can be applied expressions consisting of both literals and variables:

Random integers can be generated by combining RND and INT: e.g.

Seeds may not produce the same result on another platform.

Some functions are provided to help you manipulate strings. Functions that return a string have a ‘$’ suffix like string variables.

Note that unlike some other BASIC variants, string positions start at 0.

Examples for ASC, CHR$ and STR$

Variables can be saved and retrieved from disk using a similar method to the DATA and READ commands. This can be used for example for save games, or referencing pre-created data you don’t wish to define in code.

Files are written to a read from the currently selected disk. See “Disk system and commands”, above.

Music is actually played via pygame which uses your system’s midi. It may sound different depending on platform.

A note about system timing

Artemis can ‘tick’ at most 30 times a second. This is a hard limit of the speed of the system.

Executing 10,000 lines of code since the last tick will also cause a tick.

JiBASIC is not particularly optimised. Your program may get less than 30 ticks/second. You should NOT assume you can draw the screen in a timely manner.

Commands that halt execution of the program such as INPUT and WAIT will cause many ticks before control is handed back to the program.